Renee Wells 19/02/2014
Notice: I receive compensation if you buy something through affiliate links on this post. This does not change the price you would pay.

A budget stand mixer with the same mixing action as a KitchenAid? This detailed Hamilton Beach 63325 stand mixer review outlines full set of features, ratings, performance and where to find the best price.

Let’s find out how well this table top mixer works and what its capable of.

What a steal for a planetary mixer if this proves to be as efficient and as dependable as the bigger, more costly brands and models.

A 300-watt motor powers this mixer. It’s the maximum power consumption of the machine when loaded and running at high speed. What can that power do? Well, most mixing jobs but not for regular use on bread dough or tough cookie dough.

The unit’s plug has one wide blade and fits into the outlet only one way. This is called a polarized plug. It is designed to decrease the risk of electrical shock. This should be a consideration before getting this appliance in case you don’t have an outlet for a polarized plug. An adapter should not be used because it will negate the purpose of this safety feature.

You have to tilt the head of this table top mixer when attaching and removing accessories – bowl, beater, hook and whip. It’s also helpful if you have to do some mixing by hand or when adding ingredients.

CAUTION: Do not put fingers in the hinge area when tilting or lowering the mixer’s head.

Features of the Hamilton Beach 63325

This is a stand alone mixer. It doesn’t convert to a hand mixer. It has suction cups on the base to keep it grounded when running.

The head should first be tilted before attaching the accessories. The order is: first, the bowl then the beater, hook or whip. A slot at the base of the stand holds the bowl. Just push the bowl down and turn clockwise to lock. Put the beater or hook or whip on the attachment shaft and push. Lower the head.

To detach accessories, lift the head again. Start with the beater or hook or whip. Pull it straight down and away from the shaft. Release the bowl with a counter clockwise turn and lift. Lower the head.

The bowl locks tight and releases easily. The beater, hook and whip are also easy to attach and remove.

The speed dial is located at the side of the stand just below the tilt head button. A simple speed setting guide with images is printed just above the speed control knob.

The Hamilton Beach 63325 stand mixer is equipped with 6 speeds for various mixtures. Plus, there is a special fold setting which is really cool.

The fold function is controlled manually – turn the knob to “FOLD” and hold, release to stop. To fold, pulse “FOLD” on and off while slowly adding the mixture to be folded in. Folding incorporates more air into the mixtures, and the pulsing action is really great for it.

The “FOLD” function can’t be found in the big stand mixers I have come across. If one of their settings can be used to fold, it’s not explicitly stated.

The speed dial moves from 0 to 6 in the clockwise direction. The “FOLD” function is to the left of “0”. Here are some tips for choosing speed settings in this model:

Speeds 1-6 can be used for the flat beater and whisk, depending on the mixture. Don’t exceed speed 2 when using dough hook.

Types of Mixture and Volume 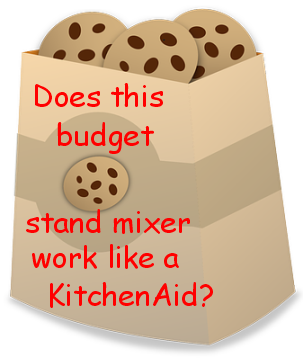 This Hamilton beach mixer does most mixing jobs pretty well. It has no trouble with cakes, creams, frostings and other easy batters.  If it seems to strain with cookie dough, increase the speed.  Don’t add flour in one dump, do it one cup at a time.

As with most stand mixers for home use, kneading bread dough is a different story. It can get the job done but you’ve got to use a little care, and not often. The motor may moan and struggle. It may get by slowly with the occasional kneading for a loaf of bread but not for bigger batches.

If you do a lot of baking, it’ll be a good move to forego the bread dough and just use it for light to medium batters. If you don’t bake often, it can get the occasional bread done, but stick to small portions of thick dough.

If you are going to whip less than 2 eggs or less than 1 cup of cream, use a hand mixer instead because the wire whisk may not be immersed substantially to whip well.

A common issue with all stand mixers is the oft-repeated “doesn’t mix well, have to scrape the side and bottom” complain.

This model mixes better than the two-beater system that spins in the middle. However, the beater height cannot be adjusted and it does not reach the bottom of the bowl.

The manufacturer’s manual says you should stop “FREQUENTLY” and scrape the side when mixing thin batters. And, that is what people are doing, even with thicker consistencies. Scraping  sticky batters may not be frequent because the batter itself will tend to catch what’s on the surface of the bowl.

The rectangular head covers most of the bowl that it leaves little room to add ingredients or to mix by hand. It’s either the head is big or the bowl is too narrow. And, the plastic disc on top of the beater, hook and whisk interferes when adding ingredients.

The manufacturer recommends to “add ingredients as close to the sides of the bowl as possible, not directly into the moving attachment”. You’d have to have proper timing. It can be done with liquid ingredients. No way will you be able to add dry ingredients and not have them flying back at you if it’s running. And, it’s kind of awkward just trying to find the right position. The best way is to stop the mixer, lift the head, then add the ingredients.

You’d have to lift the head, too when you scrape and get the bottom content. There’s just too little room to mix conveniently with the head down. A trick you can use to minimize scraping is to use a spray bottle of water. Just give the side of the bowl a tiny spray. Or, one user just raised the bowl with her hands to get the beater to sweep the side and bottom.

There are no attachments like pasta maker, etc., for this model. Other bowl sizes cannot be used with the Hamilton Beach 63325 stand mixer. Replacement beater, dough hook, whisk and bowl are available from the manufacturer.

This stand mixer looks solid and sturdy. I have found only one report of a defective unit when received. I did not find accounts of units that choked-off  in a few days or months or less than a year, despite reports saying it “sounded like it’s going to rip apart” when working on heavy dough. Pretty durable for a small budget stand mixer.

The machine is made of plastic and is so light you can lift it up with one hand with the bowl included. It is compact and doesn’t take a lot of space on cabinets and counter tops.  This is perfect for those with small kitchens, those with weak arms and the elderly. It can easily be kept in and taken out of cabinets.

Care and Cleaning of the Hamilton Beach 63325

The stand mixer  and its attachments are easy to clean. Unplug the unit after use. Remove all attachments. Wipe the machine with damp cloth, removing all sticking stuff. Wipe the attachment shaft clean of residues.

All attachments, bowl, beater, dough hook and whisk, can be cleaned in the dishwasher. However, do not use the SANI cycle of the dishwasher because the temperature may damage the parts. Dry everything before storing.

Overall rating on Amazon for this stand mixer is quite high. Most reviews are positive and most consumers think that it is good value for the money. Despite finding some fault, a significant number of reviewers say that the fault is just a tiny inconvenience compared to price and performance.

The issues brought out are mostly consistent although the reviewers give different ratings for the same issue. Somehow, these reviews mirror the expectations of each consumer and show that acceptability and tolerance vary for each one.

This one is an affordable alternative to high-priced stand mixers with planetary mixing action. It is priced well for what it delivers.

Different retail sites say that the Hamilton Beach 63325 machine has the same mixing action as a KitchenAid stand mixer. It’s true. But, it doesn’t mean it performs like a KitchenAid.

However, I think it is a very good alternative to a KitchenAid for someone on a budget who is looking for a better option than the two-beater stand mixers. It can do most mixture consistencies. It’s just not made for heavy mixing. It will need assistance. So does a KitchenAid, although not to the same degree.

I can see the value of this as an entry level stand mixer if you are a beginner or if you’re looking to get your  first stand mixer, or if you just want a bit of ease and convenience.