Renee Wells 03/03/2014
Notice: I receive compensation if you buy something through affiliate links on this post. This does not change the price you would pay. 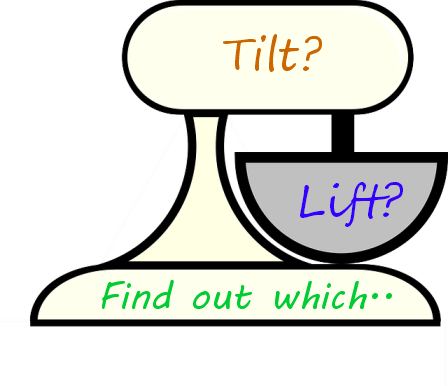 A good stand mixer is quite a big investment. It’s not something that most of us can buy anytime. Some of us have to save hard for a really good model that we hope will last us for years. Before we pick one, we research models and features because we want them to serve us well.

When it comes to how you can access the bowl, attachments and accessories of a stand mixer, there are two options for you. It’s either a tilt head model or a bowl lift model. It’s good to know what each option offers and how they differ so that you know exactly what to expect and to prepare for.

There seems to be some confusion when it comes to these two options. One owner of a high-end model submitted a review saying that she is disappointed because she cannot lift the head. Well, it’s because she got a bowl lift model.

What Is a Tilt Head Stand Mixer?

As the name implies, you can tilt the mixer head. The head of  some KitchenAid stand mixers tilts from where the head and the stand join, just on top of the stand. You have to unlock the head before lifting and lock it before operating.

Cuisinart’s tilt head mixers tilt from the middle of the stand. Its stand mixers are usually shorter. Consequently, the space between the head and the bowl is smaller.

What purpose does tilting the head serves? It is needed when you attach and remove the bowl, beater, whip or hook. It is almost impossible to do them with the head down because there is very little room to maneuver.

A tilt head is also handy when you want more room for scraping and mixing the contents by hand, or when adding ingredients.

What Is a Bowl Lift Stand Mixer?

Bowl lift stand mixers are taller. Its head is fixed. The bowl is held by two clamps on either side. It is raised and lowered by turning a crank on the side of the stand. Lifting the bowl will bring it into contact with the beaters. Lowering it will give space to attach and remove accessories and to access contents of the bowl.

It’s easier to attach, change and remove accessories in tilt head models. Batter that clings to the beater drips down better when the head is tilted because of its slanting position. It’s also easier to scrape off sticky batter from the beater.

Tilt head models require less vertical space when not in use, so it’s easier to find room for it under cabinets. You can just pull it out when you’re going to use it if there is not enough space.

The lifting mechanism, however, presents a drawback. Because there is a hinge, the head has a tendency to vibrate. Take the KitchenAid tilt head mixers. There are several reports that the pin that holds the head to the stand tends to loosen causing the head to bob, especially with thicker and heavier mixtures.

Removing beater, whip or hook in a bowl lift stand mixer can be a bit awkward. When you pull them to detach, you do so vertically down. That will usually mean dipping the beater on the batter again, especially, when the bowl is full. It can get messy.

Bowl lift models are steadier because the head is not hinged to the stand. More powerful mixers with bigger motors and bigger capacity are usually bowl lift models. The KitchenAid Pro Series 6-quart, 575 watts motor stand mixer is a bowl lift. You cannot find a KitchenAid 6-quart with a tilt head. Cuisinart have 7-quart, 1000 watts tilt head models, though.

One satisfied owner of a KitcheAid Pro shares that his dream is to have a Pro with a tilt head. I asked my husband, an engineer, why more powerful stand mixers are bowl lift types. His opinion: it’s most probably a design consideration because more power means a heavier motor. The designers deem it better to keep a big head fixed.

© 2013 – 2022 Mix It Bake It All rights reserved.
We use cookies to ensure that we give you the best experience on our website. If you continue to use this site we will assume that you agree to our use of cookies as set forth in our Privacy Policy.OkPrivacy